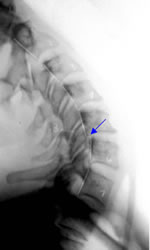 This extension x-ray image
illustrates ligamentous
instability at C5-C6.
The AMA Guides2 attribute
a 25% whole-person
impairment rating to those
who meet loss of motion
segment integrity criteria
in the cervical spine.

Over the last few years, it has become clear from the scientific literature that chronic pain after a rear-end collision is due to injury of the ligaments of the spine.

During a rear-end collision, the lower segments of the cervical spine are rapidly moved forward while the upper portion of the spine lags behind. This creates “shear” forces in the lower spine, which can stretch or tear the spinal ligaments.

This ligamentous injury can result in instability of the cervical spine, which in turn can cause chronic pain and a variety of other symptoms.

A new study1 from Yale University expands on our knowledge of these types of injury. The goal of the study was to determine the injury threshold for the spinal ligaments. The researchers used six human cadaver cervical spines for the experiments. On each spine, they measured the range of motion of each vertebral segment before and after each test. By doing so, they were able to determine the amount of ligament stretch that occurred during the test.

The authors found that the first significant increase in ligamentous stretching occurred during the 5g collision in the C5-C6 spinal segment—the same spinal segment from which most whiplash symptoms seem to originate.

As the acceleration increased to 6.5 and the 8g, the risk of injury spread to other parts of the spine. The authors sum up their findings:

"Biomechanical testing of the [specimens] before and after simulated whiplash demonstrated that the lower cervical spine had the greatest injury potential and the mode of injury was extension. The peak T1 horizontal acceleration of 5 g was determined as the injury threshold acceleration. The first injuries occurred at the C5–C6 level, as indicated by increases in the extension neutral zone. At higher accelerations, the injuries spread to all intervertebral levels of the lower cervical spine from C4–C5 to C7–T1. The extension mode of injury may suggest that the onset of subfailure injuries of the anterior longitudinal ligament and anterior anulus fibers, in addition to facet joint impingement. Clinical evidence supports these injury mechanism hypotheses."

The authors also discuss the chronic nature of such injuries:

"Chronic pain resulting from low-speed collisions may be explained by partial tears of the soft tissues, including anulus fibers, ligaments, and avascular cartilage. Because of poor blood supply, these tissues may not completely heal following injury, resulting in altered cervical spine kinematics that can lead to accelerated degenerative changes and clinical instability."